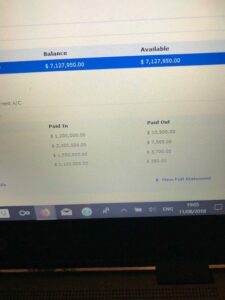 True Story – one of my clients has been scammed for well over $200 000 in the name of love. Lets call her Sophia. A rather nice looking man, Jason, professionally employed, contacted her via facebook. Over a few weeks and months a rapport built between them and Sophia was head over heels in love.

Jason said he was working with a team of men in South Africa, but ran into difficulties getting his money transferred to pay them and so asked Sophia for assistance. He sent her screenshots of his Barclays Bank account showing he had well over $7 million, but due to International Money Transfer restrictions couldn’t pay his team. He even demonstrated via a series of screenshots an online transfer of $500K to Sophia and a promise he would come to her as soon as he had left Africa.

Unfortunately, the Barclays Bank website was a fake, and so was Jason. Even more unfortunately this was not the first time he had asked Sophia for help with a promise of their future life together.

Enough said…. But know that these scams are happening, right here and right now, to your neighbour, your friend, your family and you don’t even know. Maybe its even happening to you.

In Sophia’s case she has not only lost her money, but the person she fell in love with doesn’t exist. This has had significant impact on both her financial and mental health.

I am now helping Sophia identify the instances of fraud and we are working together with the Department of Consumer Protection and her bank to contain the damage and protect Sophia from further attack. Fraudulent attempts have continued with communications from false International Monetary Fund and United Nations profiles assuring her of their ability to recover her funds… for a price. As I have researched this issue I have been truly horrified by the tactics and lengths these criminals will go to with their extortion.

• Unsolicited contact via facebook or online games (such as Words with Friends)
• Very quick development of relationship, with early declarations of love
• MAJOR RED FLAG – Request for money, particularly via wire transfer services such as Western Union, Bitcoin or purchase of vouchers.
• ANOTHER RED FLAG – Transfer of money to you requesting you forward to another party (This is potentially money laundering and can get you in a LOT of trouble)
• Anger if you refuse requests for money
• Sudden crisis (sick daughter, arrest, unpaid workers) requiring urgent transfer of money
• Threats to yourself and/or your family if you don’t pay (in the majority of cases these scams originate from countries such as Africa… they are not going to risk jail by arriving on your doorstep. If they feel the game is over they will simply move on to the next victim
• Follow up contact from an official agency (such as International Monetary Fund, or United Nations) saying they have intercepted your stolen funds and want to work with you to return them. Its another scam.

How can you protect yourself?

• Guard your personal identity where possible. Don’t give them your address, and definitely don’t provide images of your passport and drivers licence.
• Do not discuss your personal financial situation
• Reverse Image search their profile picture. I found Jason’s picture on www.tineye.com which lead me to a website in Germany www.fake-scam.info – this ‘Jason’ has over 150 fake profiles, and they are just the ones that have been reported. Also try the reverse image search function of Google.
• Be wary of fake websites. The Barclay’s Bank site that was shown to Sophia had been constructed on WordPress. I have written a further article on the ‘tells’ that gave this away.

More help can be found at: